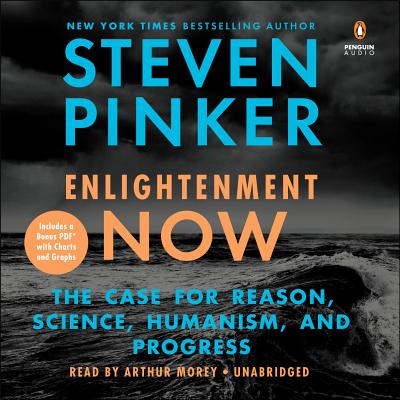 By Steven Pinker, Arthur Morey (Read by)
Not Available
Hard to Find

"My new favorite book of all time." --Bill Gates

If you think the world is coming to an end, think again: people are living longer, healthier, freer, and happier lives, and while our problems are formidable, the solutions lie in the Enlightenment ideal of using reason and science.

Is the world really falling apart? Is the ideal of progress obsolete? In this elegant assessment of the human condition in the third millennium, cognitive scientist and public intellectual Steven Pinker urges us to step back from the gory headlines and prophecies of doom, which play to our psychological biases. Instead, follow the data: In seventy-five jaw-dropping graphs, Pinker shows that life, health, prosperity, safety, peace, knowledge, and happiness are on the rise, not just in the West, but worldwide. This progress is not the result of some cosmic force. It is a gift of the Enlightenment: the conviction that reason and science can enhance human flourishing.

Far from being a naïve hope, the Enlightenment, we now know, has worked. But more than ever, it needs a vigorous defense. The Enlightenment project swims against currents of human nature--tribalism, authoritarianism, demonization, magical thinking--which demagogues are all too willing to exploit. Many commentators, committed to political, religious, or romantic ideologies, fight a rearguard action against it. The result is a corrosive fatalism and a willingness to wreck the precious institutions of liberal democracy and global cooperation.

With intellectual depth and literary flair, Enlightenment Now makes the case for reason, science, and humanism: the ideals we need to confront our problems and continue our progress.

STEVEN PINKER is the Harvard College Professor of Psychology at Harvard University. A two-time Pulitzer Prize finalist and the winner of many awards for his research, teaching, and books, he has been named one of Time's 100 Most Influential People in the World Today and Foreign Policy's 100 Global Thinkers.

“An excellent book, lucidly written, timely, rich in data and eloquent in its championing of a rational humanism that is — it turns out — really quite cool.”—New York Times Book Review

"The world is getting better, even if it doesn’t always feel that way. I’m glad we have brilliant thinkers like Steven Pinker to help us see the big picture. Enlightenment Now is not only the best book Pinker’s ever written. It’s my new favorite book of all time.”—Bill Gates

“A terrific book…[Pinker] recounts the progress across a broad array of metrics, from health to wars, the environment to happiness, equal rights to quality of life.”—Nicholas Kristof, The New York Times

“Pinker is a paragon of exactly the kind of intellectual honesty and courage we need to restore conversation and community.”—David Brooks, The New York Times

“[Enlightenment Now] is magnificent, uplifting and makes you want to rush to your laptop and close your Twitter account.”—The Economist

“If 2017 was a rough year for you, look no further than Steven Pinker’s engaging new book, Enlightenment Now, to cheer you up. Conceived before Donald Trump even announced his candidacy, it could not have been better timed to clarify — and, for some, refute — the habits of mind that brought Trump and the GOP to power.”—The Washington Post

“Vindication has arrived in the form of Steven Pinker’s latest book. Enlightenment Now: The Case for Reason, Science, Humanism, and Progress is remarkable, heart-warming, and long overdue."—Christian Science Monitor

“Pinker is a paragon of exactly the kind of intellectual honesty and courage we need to restore conversation and community, and the students are right to revere him.” —The Seattle Times

“[A] magisterial new book…Enlightenment Now is the most uplifting work of science I’ve ever read.”—Science Magazine

“A passionate and persuasive defense of reason and science…[and] an urgently needed reminder that progress is, to no small extent, a result of values that have served us - and can serve us - extraordinarily well.”—The Philadelphia Inquirer

“A meticulous defense of science and objective analysis, [and] a rebuttal to the tribalism, knee-jerk partisanship and disinformation that taints our politics.”—San Francisco Chronicle

“[Pinker] makes a powerful case that the main line of history has been, since the Enlightenment, one of improvement.”—Scientific American

“Let’s stop once in a while to enjoy the view—I’m glad Pinker is pushing for this in a world that does it too rarely… It’s hard not to be convinced.”—Quartz

“As a demonstration of the value of reason, knowledge, and curiosity, Enlightenment Now can hardly be bettered.”—The Boston Globe

“With a wealth of knowledge, graphs and statistics, a strong grasp of history, and an engaging style of writing…Enlightenment Now provides a convincing case for gratitude.”—Pittsburgh Post Gazette

“A forceful defense of the democratic, humanist institutions that [Pinker] says brought about these changes, and a declaration that reason, science and humanism can solve the problems to come.”—Atlanta Journal-Constitution

“A masterly defense of the values of modernity against ‘progressophobes’.”—Times Higher Education

“Enlightenment Now strikes a powerful blow against the contemporary mystifications being peddled by tribalists on both the left and the right.”—Reason

“Pinker presents graphs and data which deserve to be reckoned with by fair-minded people. His conclusion is provocative, as anything by Pinker is likely to be.” —Colorado Springs Gazette

“Elegantly [argues] that in various ways humanity has every reason to be optimistic over life in the twenty-first century…. A defense of progress that will provoke deep thinking and thoughtful discourse among his many fans.”—Booklist

“[An] impeccably written text full of interesting tidbits from neuroscience and other disciplines…The author examines the many ways in which Enlightenment ideals have given us lives that our forebears would envy even if gloominess and pessimism are the order of the day.” —Kirkus Review


Praise for The Better Angels of Our Nature:

“If I could give each of you a graduation present, it would be this—the most inspiring book I've ever read."—Bill Gates (May, 2017)