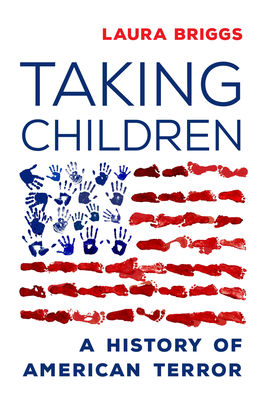 "You have to take the children away."—Donald Trump

Taking Children argues that for four hundred years the United States has taken children for political ends. Black children, Native children, Latinx children, and the children of the poor have all been seized from their kin and caregivers. As Laura Briggs’s sweeping narrative shows, the practice played out on the auction block, in the boarding schools designed to pacify the Native American population, in the foster care system used to put down the Black freedom movement, in the US’s anti-Communist coups in Central America, and in the moral panic about “crack babies.” In chilling detail we see how Central Americans were made into a population that could be stripped of their children and how every US administration beginning with Reagan has put children of immigrants and refugees in detention camps. Yet these tactics of terror have encountered opposition from every generation, and Briggs challenges us to stand and resist in this powerful corrective to American history.

Laura Briggs is Professor of Women, Gender, Sexuality Studies at University of Massachusetts Amherst. She is the author of How All Politics Became Reproductive Politics: From Welfare Reform to Foreclosure to Trump; Somebody’s Children: The Politics of Transracial and Transnational Adoption; and Reproducing Empire: Race, Sex, Science, and U.S. Imperialism in Puerto Rico.

"This is a formidable book, one that cuts against the Trump exceptionalism that suffuses much mainstream liberal discourse."
— Boston Review

“An incisive history of kidnapping as American policy. . . . Connects these into a seamless tale of torment, torture and arrogance; a description of US history if there ever was one. It is a history that demands a reckoning.”
— CounterPunch

“A forceful and captivating book that readers won’t be able to put down, and that listeners from all sort of backgrounds will definitely want to hear more about.”
— New Books Network

Briggs . . . recounts outrages that are only a few decades old. Resurrecting this forgotten history, she demonstrates its continuity with the recent separation of migrant families.”

“A meticulously-researched, humane, and highly readable work of scholarship. . . . Essential reading for all those with an interest in human rights, social justice issues, child welfare, immigration and American history. It should inspire a generation to challenge and resist the cruel practice of taking children for political ends.”
— Ethnic and Racial Studies

"A wide- ranging and uncomfortably revealing account of what might be called the tradition of family separation."
— New York Review of Books

"Briggs’ storytelling style in this incisive and well-researched text will keep readers engaged and moving quickly through its pages. . . .Taking Children is an important read for social work students considering a career in child welfare or family services and for professionals and lawmakers interested in movements to reform systems that have historically served to control and police the behavior of individuals and communities of color."