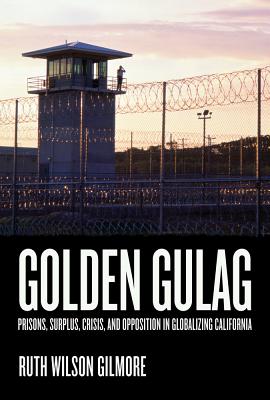 Despite a crime rate that has been falling steadily for decades, California has, what a state analyst called, “the biggest prison building project in the history of the world.” The first detailed explanation of California’s expanding prison population, Ruth Wilson Gilmore’s landmark, award-winning Golden Gulag looks at how political and economic forces, ranging from global to local, conjoined to produce the prison boom. Detailing crises that hit California’s economy with particular ferocity, Gilmore argues that defeats of radical struggles, weakening of labor, and shifting patterns of capital investment have been key conditions for prison growth. The results—a vast and expensive prison system, a huge number of incarcerated young people of color, and the increase in punitive justice such as the “three strikes” law—pose profound and troubling questions for the future of California, the United States, and the world.

This revised second edition further connects California’s prison model to broader national and international trends, and updates readers with developments in the 21st century, including mounting grassroots opposition to the carceral state and a changing public understanding of why mass incarceration matters today.

Ruth Wilson Gilmore is Professor of Geography and Associate Director of the Center for Place, Culture, and Politics at CUNY Graduate Center. She is the recipient of multiple awards, most notably the Angela Davis Award for Public Scholarship and the Lora Romero First Book Award for Golden Gulag, both awarded by the American Studies Association.