Weighing In: Obesity, Food Justice, and the Limits of Capitalism (California Studies in Food and Culture #32) (Paperback) 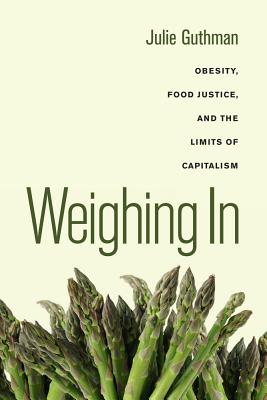 By Julie Guthman
Not Available

Weighing In takes on the “obesity epidemic,” challenging many widely held assumptions about its causes and consequences. Julie Guthman examines fatness and its relationship to health outcomes to ask if our efforts to prevent “obesity” are sensible, efficacious, or ethical. She also focuses the lens of obesity on the broader food system to understand why we produce cheap, over-processed food, as well as why we eat it. Guthman takes issue with the currently touted remedy to obesity—promoting food that is local, organic, and farm fresh. While such fare may be tastier and grown in more ecologically sustainable ways, this approach can also reinforce class and race inequalities and neglect other possible explanations for the rise in obesity, including environmental toxins. Arguing that ours is a political economy of bulimia—one that promotes consumption while also insisting upon thinness—Guthman offers a complex analysis of our entire economic system.

Julie Guthman is Professor of Social Sciences at the University of California, Santa Cruz. She is the author of Agrarian Dreams? The Paradox of Organic Farming in California (UC Press)

"Weighing In is an outcome of impressive intellectual, emotional, and physical labor on the part of the author."
— Gastronomica

“A rich topography of US obesity that accomplishes the difficult feat of challenging the discursive foundations of the ‘obesity crisis’ while critiquing conventional food capitalism. . . . Weighing In is the book that fat studies and critical geographers of fat have been waiting for.”
— Social & Cultural Geography

“If you have any interest in the causes of obesity, our societal response to the ‘obesity epidemic,’ the role of capitalism in our food system, or want to be challenged with a book that goes against everything the media has told you about weight gain—this will be a rewarding read.”
— Serious Eats

"Guthman’s Weighing In is a much-needed critical analysis of the dominant discourse surrounding the so-called ‘‘obesity epidemic.’’
— Agriculture and Human Values