Heroine of the Titanic: The Real Unsinkable Molly Brown (Hardcover) 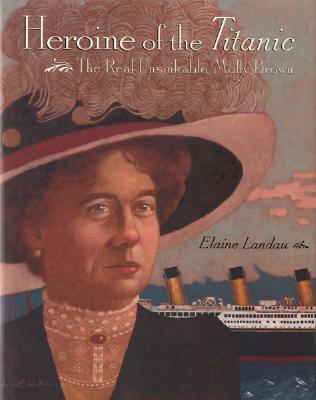 By Elaine Landau
Not Available
Hard to Find

Margaret (Molly) Brown is best known for her bravery and compassion during the tragic sinking of the Titanic, which catapulted her to international fame virtually overnight. But few people are aware that she was also an outspoken suffragist, a tireless champion of miners’ rights, and one of the first women to run for the U.S. Congress. Raised in a working-class Mississippi River town, Margaret—who was never called Molly in her lifetime—followed her brother to a rough-and-tumble Colorado boomtown at a time when few women dared to settle in the then untamed West. She married a silver miner who eventually struck it rich, and she used her new wealth and social prominence to further her own education and to fight for the rights of others, regardless of their race or religious beliefs. This vivid account of Margaret Brown’s remarkable life from well-regarded author Elaine Landau shows how much a strong woman could accomplish, even at a time when few opportunities were available. Archival photographs and excerpts from early-twentieth-century newspapers and Brown family letters provide a clear picture of this forward-looking, energetic individual and the society that she strove to reform. Chronology, endnotes, bibliography, index.

Elaine Landau has written over one hundred books for young people on a variety of topics ranging from AIDS to terrorism. She lives in Miami, Florida.

Landau hits just the right tone in this complete portrait of a "social figure, suffragette, and patriot", and readers will enjoy learning the truth about her.
School Library Journal, Starred

While keeping the focus on Brown's experiences and personality, the text quietly illuminates the social and historical landscape that surrounded her, contrasting her forthright support of causes such as worker's rights and feminism with more staid behavior generally expected of women of her social status. Part of Landau's intent is to separate fact from legend, and to this end she retells the rumors alongside accounts that set the facts straight.
The Bulletin of the Center for Children's Books

This informative biography offers an objective, well-balanced look at the woman who became an American legend for her heroism during the Titanic disaster. Black-and-white archival photographs effectively illustrate the accessible text, which concentrates on Brown's life after the Titanic and on her activism as a social reformer.
Horn Book Guide