Patriots, Loyalists, and Revolution in New York City, 1775-1776 (Reacting to the Past) (Paperback) 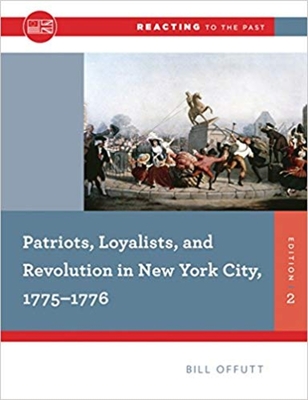 By Bill Offutt
Not Available
Out of Print

A Norton original in the Reacting to the Past series, Patriots, Loyalists, and Revolution in New York City invites students to experience the chaos of the American Revolution.

In this Reacting to the Past game, the classroom is transformed into New York City in 1775, where Patriot and Loyalist forces fight for advantage among a divided populace. Confronted with issues like bribery, the loss of privacy, and collapsing economic opportunity along with ideological concerns like natural rights, the philosophical foundations of government, and differing definitions of tyranny, students witness how discontent can lead to outright revolt.

Reacting to the Past is an award-winning series of immersive role-playing games that actively engage students in their own learning. Students assume the roles of historical characters and practice critical thinking, primary source analysis, and argument, both written and spoken.

For more information about the series, visit wwnorton.com/reacting.

William Offutt is Professor of History and Faculty Advisor for the Pforzheimer Honors College at Pace University. He received his AB from Stanford University, and his J.D. from Stanford Law School. Abandoning the law, he then went to graduate school, earning a Ph.D. in Early American History at Johns Hopkins University under Professor Jack P. Greene. His first book, Of Good Laws and Good Men: Law and Society in the Delaware Valley 1680–1710, was published by Illinois University Press. His academic interests focus on the relationship between law and society, particularly the methods by which legal systems obtain and keep their legitimacy. He has taught courses on colonial America, revolutionary America, the Civil War, Constitutional history, and American women’s history. In addition to his own Reacting game, he has taught eight other Reacting games to students at Pace, and he has participated in numerous Reacting conferences as Gamemaster and/or player.