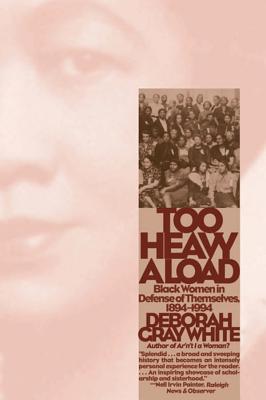 Too Heavy a Load celebrates this century's rich history of black women defending themselves, from Ida B. Wells to Anita Hill. Although most prominently a history of the century-long struggle against racism and male chauvinism, Deborah Gray White also movingly illuminates black women's painful struggle to hold their racial and gender identities intact while feeling the inexorable pull of the agendas of white women and black men. Finally, it tells the larger and lamentable story of how Americans began this century measuring racial progress by the status of black women but gradually came to focus on the status of black men-the masculinization of America's racial consciousness. Writing with the same magisterial eye for historical detail as in her best-selling Ar'n't I a Woman, Deborah Gray White has given us a moving and definitive history of struggle and freedom. "Splendid . . . a broad and sweeping history that becomes an intensely personal experience for the reader. . . . An inspiring showcase of scholarship and sistership." - Nell Irvin Painter, Raleigh News & Observer

Deborah Gray White is the Board of Governors Professor of History and Professor of Women's and Gender Studies at Rutgers University. She is the author of Ar’n’t I A Woman? and Too Heavy a Load, amongst other books.