The Book of Embraces (Paperback) 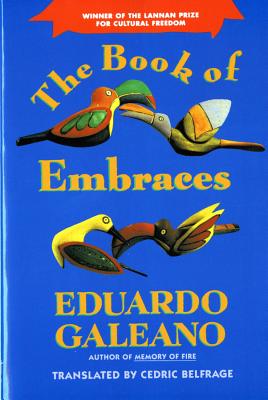 Eduardo Galeano (1940—2015) was the author of Open Veins of Latin America, Days and Nights of Love and War, The Book of Embraces, We Say No, and other works.

Cedric Belfrage was an author, journalist, translator, and co-founder of the radical weekly newspaper the National Guardian. English by birth, he was deported by the U.S. government back to England in 1955, and later became the translator for the Uruguayan author Eduardo Galeano.

[Galeano] is a dangerous radical storyteller, like Gabriel Garcia Marquez, like Isabel Allende, and like Pablo Neruda before them. . . . The Book of Embraces is a mosaic, or Deigo Rivera mural in words.

In The Book of Embraces, Galeano goes out on the tightrope and then levitates in the air above it. . . . [His] subject is nothing less that the variety of human life and love.