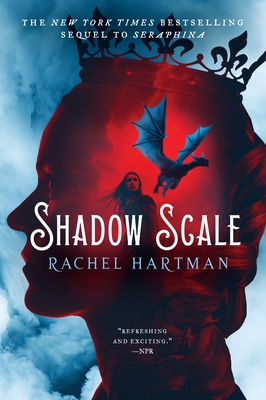 This is book number 2 in the Seraphina Series series.

Dragons and humans are at war in this eagerly awaited sequel to the critically acclaimed and New York Times bestselling fantasy, Seraphina.

Seraphina is tangled in a war between the dragon rebels and the human court. The dark secret of her true identity—half-dragon, half-human—has now become her advantage. Only she has the power to unite the kingdom, and she intends to use it.

Embarking on a life-changing journey, Seraphina seeks to find the rest of her half-dragon brethren, whose unique gifts may make the difference in the battle for the future of her world. But gathering everyone together is no straightforward task. Hidden histories and outright lies surface that make her task almost impossible.

Then Seraphina learns that someone is working against her. What hope is there for brokering peace between dragons and humans when an unlikely enemy is determined to see both go up in flames?

As a child, RACHEL HARTMAN played cello, lip-synched Mozart operas with her sisters, and fostered the deep love of music that inspired much of Seraphina. Rachel earned a degree in comparative literature but eschewed graduate school in favor of bookselling and drawing comics. Born in Kentucky, she has lived in Philadelphia, Chicago, St. Louis, England, and Japan. She now lives with her family in Vancouver, Canada. To learn more, please visit SeraphinaBooks.com or RachelHartmanBooks.com.

"This is a tale of love, mistakes, double-crosses, and pain---one that left me tied up in knots!"—Tamora Pierce, New York Times bestselling author