How Far the Light Reaches: A Life in Ten Sea Creatures (Hardcover) 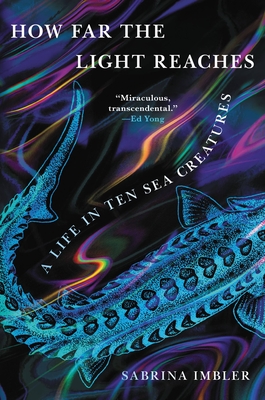 “The only thing more impressive than Imbler’s marine knowledge is their knowledge of themselves. Searching the ocean for new ways of being, they describe personal, familial, and communal trauma with astonishing honesty and lyricism.”
— Amy Woolsey, Bards Alley, Vienna, VA

A fascinating tour of creatures from the surface to the deepest ocean floor, inviting us to envision wilder, grander, and more abundant possibilities for the way we live. “A miraculous, transcendental book.” (Ed Yong, author of An Immense World)

A TIME Must-Read Book of the Year  •  A PEOPLE Best New Book  •  A Barnes & Noble Best Book of 2022  •  An Indie Next Pick  •  One of Winter’s Most Eagerly Anticipated Books: VANITY FAIR, VULTURE


A queer, mixed race writer working in a largely white, male field, science and conservation journalist Sabrina Imbler has always been drawn to the mystery of life in the sea, and particularly to creatures living in hostile or remote environments. Each essay in their debut collection profiles one such creature, including: Imbler discovers that some of the most radical models of family, community, and care can be found in the sea, from gelatinous chains that are both individual organisms and colonies of clones to deep-sea crabs that have no need for the sun, nourished instead by the chemicals and heat throbbing from the core of the Earth. Exploring themes of adaptation, survival, sexuality, and care, and weaving the wonders of marine biology with stories of their own family, relationships, and coming of age, How Far the Light Reaches is a shimmering, otherworldly debut that attunes us to new visions of our world and its miracles.

Sabrina Imbler is a writer and science journalist living in Brooklyn. Their first chapbook, Dyke (geology) was published by Black Lawrence Press. They have received fellowships and scholarships from the Asian American Writers' Workshop, Tin House, the Jack Jones Literary Arts Retreat, Millay Arts, and Paragraph NY, and their work has been supported by the Café Royal Cultural Foundation. Their essays and reporting have appeared in various publications, including the New York Times, the Atlantic, Catapult, and Sierra, among others.

A TIME Must-Read Book of the Year
A PEOPLE Best New Book
A Barnes & Noble Best Book of 2022
An Indie Next Pick
One of Winter’s Most Eagerly Anticipated Books: VANITY FAIR, VULTURE

“Compulsively readable, beautifully lyric, and wildly tender, How Far the Light Reaches asks the reader to sink down, slip beneath, swim forward with outstretched hands, trusting that Sabrina Imbler is there to guide us through the dark. It presents the body as one that might morph and grow in any number of directions. How do we see ourselves? Can we learn to unsee? A breathtaking, mesmerizing debut from a tremendous talent.”—KRISTEN ARNETT, NYT bestselling author of With Teeth

“This is a miraculous, transcendental book. Across these essays, Imbler has choreographed a dance of metaphor between the wonders of the ocean’s creatures and the poignancy of human experience, each enriching the other in surprising and profound ways. To write with such grace, skill, and wisdom would be impressive enough; to have done so in their first major work is truly breathtaking. Sabrina Imbler is a generational talent, and this book is a gift to us all.”—ED YONG, New York Times Bestselling author of An Immense World

“How Far the Light Reaches marks the arrival of a phenomenal writer creating an intellectual channel entirely their own, within which whales and feral goldfish swim by the enchantment, ache, and ecstasy of human life.”—MEGHA MAJUMDAR, New York Times bestselling author of A Burning

“How Far the Light Reaches draws startling, moving connections between the lives of sea creatures and our existence on solid ground; between the vast depths of the ocean and the similarly mysterious expanse of inner experience. Working at the nexus of nature writing and memoir, Sabrina Imbler is beautifully reinventing both genres."
—ANGELA CHEN, author of ACE

“How Far the Light Reaches is a creature unlike any other—one that grips you with its tentacles and pulls you down into new depths. It is impossible to read this book and not be transformed.”—RACHEL E. GROSS, author of Vagina Obscura

"A pinwheel of awe spinning one 'wow' after another."—SOUVANKHAM THAMMAVONGSA, author of How to Pronounce Knife

“Sabrina Imbler’s glittering prose is as supple as an octopus, and their subject matter—whether writing about sea creatures or their own shape-shifting soul—as elemental as the ocean itself. And like the sea, How Far the Light Reaches is profound, surprising, and thrillingly strange. I love it."—SY MONTGOMERY, New York Times bestselling author of How To be A Good Creature: A Memoir in 13 Animals and The Soul of an Octopus

"How Far the Light Reaches is a bright, shimmering gift of a book that deftly glides and weaves, exploring sea life and the self with boundless curiosity, tenderness, and wisdom. Sabrina Imbler can break your heart while opening it to new wonders—their writing is as precise as it is lyrical, and will not leave you unchanged. Every essay in this brilliant debut collection deserves to be treasured."—NICOLE CHUNG, author of All You Can Ever Know

"How Far The Light Reaches is an incandescent and provocative exploration of worlds we often do not see, rendered with the utmost tenderness and care. Deftly merging reporting and memoir, Sabrina Imbler forges connections between our imperfect human lives and the depths of the ocean, providing a new framework that will forever change how we understand the world around us."

"In this captivating debut, science writer Imbler shines a light on the mysterious sea creatures that live in Earth’s most inhospitable reaches, drawing parallels to their own experience of adaptation and survival...Imbler’s ability to balance illuminating science journalism with candid personal revelation is impressive, and the mesmerizing glints of lyricism are a treat. This intimate deep dive will leave readers eager to see where Imbler goes next."—Publishers Weekly

“Imbler pulls off an impressive feat: a book about the majestic, bewildering undersea world that also happens to be deeply human.”—Lisa Wong Macabasco, VOGUE, Best Books of Fall

“Imbler blends personal history with the most fascinating writing on sea creatures living in remote and deep areas of the ocean. Metaphors abound around family, community, queerness, and survival; this book is another jewel in the crown of Imbler’s incredible work.”—Sarah Neilson, THEM, Most Anticipated LGBTQ+ Books for Fall

"A luminous interweaving of the human and the non-human, My Life in Sea Creatures is an ingenious book that shows, with a glittering skill, how the precious life around us enriches our world and our ways of living. This is nature writing with an open and daring heart."—SEÁN HEWITT, poet and author of All Down Darkness Wide.

“…much more than an account of deep-sea creatures…Imbler compellingly examines the parallels between the lives and priorities of people and aquatic animals…unique and engaging…the overall effect is heartening and encourages a reexamination of inherited ideas about family, community, and identity…Elegant, thought-provoking comparisons between aspects of identity and the trials of deep-sea creatures.”—Kirkus Reviews

"A tender, lucid look at the author’s life refracted through the deep sea. Imbler’s essays’ mesmerizing descriptions of the often mysterious lives of aquatic animals also serve as portals of inquiry into their life on land. The purple octopus’s maternal sacrifice, the yeti crab’s vibrant but transient seafloor communities and the cuttlefish’s continual transformations are not forced anthropomorphic metaphors but starting points for a visceral exploration of Imbler’s family, sexuality, gender, race and relationships. These graceful cross-species analyses illuminate the joys and responsibilities we have as ‘creatures with a complex brain."—Dana Dunham, SCIENTIFIC AMERICAN

"How Far the Light Reaches is a truly unique collection of essays about ocean life as it pertains to the author’s own story."—Ashley Holstrom, BOOK RIOT

“What would happen if art, whose main purpose is to make us feel, again merged with science?...with brutal candor and elegant metaphor, How Far the Light Reaches reveals the gap between where we are today and a truly inclusive and connected world. In so doing, [the book] also threads the loophole, weaving the outlines of a future where art and science amplify one other.”—Juli Berwald, SCIENCE MAGAZINE

“The minute I saw Sabrina Imbler’s byline, I was hooked."—Maya Homan, THE BOSTON GLOBE

“In gorgeous, lyrical prose, science journalist Sabrina Imbler interweaves fascinating research on sea creatures with their own deeply personal evolution as a queer mixed-race person struggling with assimilation, gender identity, family dynamics and where they fit within a largely homogenous society.”—GOOD HOUSEKEEPING