Handbook for an Unpredictable Life: How I Survived Sister Renata and My Crazy Mother, and Still Came Out Smiling (with Great Hair) (Paperback) 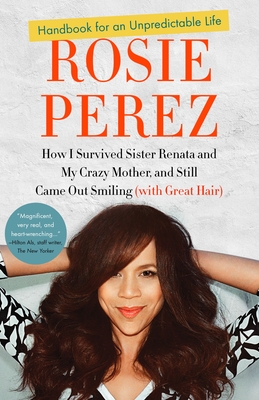 Oscar-nominated actress and star of the new musical drama Rise, Rosie Perez’s never-before-told story of surviving a harrowing childhood and of how she found success—both in and out of the Hollywood limelight.

Rosie Perez first caught our attention with her fierce dance in the title sequence of Do the Right Thing and has since defined herself as a funny and talented actress who broke boundaries for Latinas in the film industry. What most people would be surprised to learn is that the woman with the big, effervescent personality has a secret straight out of a Dickens novel. At the age of three, Rosie’s life was turned upside down when her mentally ill mother tore her away from the only family she knew and placed her in a Catholic children’s home in New York’s Westchester County. Thus began her crazily discombobulated childhood of being shuttled between “the Home,” where she and other kids suffered all manners of cruelty from nuns, and various relatives’ apartments in Brooklyn.

Many in her circumstances would have been defined by these harrowing experiences, but with the intense determination that became her trademark, Rosie overcame the odds and made an incredible life for herself. She brings her journey vividly to life on each page of this memoir—from the vibrant streets of Brooklyn to her turbulent years in the Catholic home, and finally to film and TV sets and the LA and New York City hip-hop scenes of the 1980s and ‘90s.

More than a page-turning read, Handbook for an Unpredictable Life is a story of survival. By turns heartbreaking and funny, it is ultimately the inspirational story of a woman who has found a hard-won place of strength and peace.

ROSIE PEREZ is an Oscar-nominated actress, whose credits include Do the Right Thing, White Men Can't Jump, Fearless, and The Counselor. She is the Artistic Chair of Urban Arts Partnership and sits on the Presidential Advisory Council on HIV/AIDS.

“I read Rosie Perez's magnificent, very real, and heart wrenching book with equal parts joy and horror--horror that the world can and routinely does inflict its terrors on its children, and joy that Rosie made it out to become not only the superior, iconographic artist she is, but the magnificent woman this book reveals her to be. Her voice is the captivating instrument here: forthright, funny, and utterly her own.”—Hilton Als, staff writer, The New Yorker

“Rosie Perez's Handbook For an Unpredictable Life is a shockingly brave, honest book, filled with so much grace, forgiveness  and humor that you feel invigorated reading it. A deeply moving story, told with unapologetic courage and heart.”-- George C. Wolfe

“Reading this story I was shaking my head in amazement that Rosie is even walking around on the earth, still smiling, let alone creating, contributing and caring about the world.  I know lots of artists who had to persevere and overcome a lot to get where they got and do what they do, but Rosie takes the prize for triumph of a spirit undimmed.  Charles Dickens never dreamed up a more incredible hard-knocks story.”--Edward Norton

“Rosie Perez has written a brave, hysterical, wise and compulsively readable chronicle of growing up and surviving the dual challenges of a crazy family and crazy life in Hollywood.  Like Running With Scissors before it, Handboook For an Unpredictable Life is ultimately a story of survival and will inspire us all.”—Liz Garbus

“With refreshing candor and sass, Perez transforms the painful details of her life into an inspiring reminder that even the most unforgiving of personal circumstances can be overcome.  A spunky and heartfelt memoir.” —Kirkus