In the Company of Crows and Ravens (Paperback) 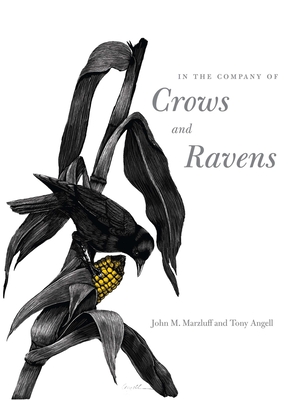 From the cave walls at Lascaux to the last painting by Van Gogh, from the works of Shakespeare to those of Mark Twain, there is clear evidence that crows and ravens influence human culture. Yet this influence is not unidirectional, say the authors  of this fascinating book: people profoundly influence crow culture, ecology, and evolution as well. Examining the often surprising ways that crows and humans interact, John Marzluff and Tony Angell contend that those interactions reflect a process of “cultural coevolution.” They offer a challenging new view of the human-crow dynamic—a view that may change our thinking not only about crows but also about ourselves.

Featuring more than 100 original drawings, the book takes a close look at the influences people have had on the lives of crows throughout history and at the significant ways crows have altered human lives. In the Company of Crows and Ravens illuminates the entwined histories of crows and people and concludes with an intriguing discussion of the crow-human relationship and how our attitudes toward crows may affect our cultural trajectory. As the authors state in their preface: “Crows and people share similar traits and social strategies. To a surprising extent, to know the crow is to know ourselves."

John M. Marzluff is Denman Professor of Sustainable Resource Sciences and professor of wildlife science, College of Forest Resources, University of Washington. Tony Angell is a freelance artist and writer in Lopez Island, Washington. Together the authors combine more than 60 years of scientific and artistic fascination with crows and their bird relatives.

"Sleek, evocative illustrations—a mysterious light seems to come directly from the eyes and feathers of these birds. . . . Learning how to slow down and observe animals around us is one simple way to form a stronger bond with nature. In the Company of Crows and Ravens is a subtle and beautiful reminder of this simple truth."—Susan Salter Reynolds, Los Angeles Times Book Review

"There is a wealth of folklore, biology and anecdote here about all species of crows – a cornucopia of corvid memorabilia. This is a well-researched, fascinating book to read, evocatively illustrated by Angell’s charming idiosyncratic scraperboards."—Tim Birkhead, Times Literary Supplement

"[A] superb study that should deepen our understanding, and perhaps appreciation, of these fascinating birds."—Library Journal

"Intriguing and inspiring insights. . . . [A] rich tapestry of folklore and science. . . . [A] comprehensive account of the impact of crows on human culture."—Joanna Dally, Science

"[A] delightful blend of science, art, and anthropology."—Booklist

"If corvids could read—and it seems they can do damn near everything else—they would surely find this book as entertaining and instructive as this human does."—Laurence A. Marschall, Natural History

"Beautifully illustrated and produced. . . . As gripping and difficult to put down as any good work of fiction."—Alex Kacelnik, Nature

"Gorgeous illustrations. . . . Though Crows and Ravens is beautiful enough for coffee-table-book status, it advances an edgy, even spooky scientific idea: that throughout history, crows and humans have changed one another’s culture."—Mary Ann Gwinn, Seattle Times

"Marzluff and Angell provide detailed facts about every extant member of the genus Corvidae. They are particularly good at addressing the effects of human habitat on crows. They provide keen insight into corvid nesting and family habits, show how corvids learn culture, language and behaviour, and recommend ways to balance crow populations."—A. J. Levin, Toronto Globe & Mail

"The authors' systematic exploration of this history is handsomely complemented by dozens of Angell's pen-and-ink drawings."—Roxana Robinson, Wilson Quarterly

"Replete with well-documented stories. . . . After reading this book I’m looking forward more than ever to crows returning to my backyard."—Susan Lumpkin, Zoogoer Magazine

"Marzluff [has] coauthored the definitive book on brainy black birds. . . . He even offers a Grand Theory: that crows and humans are undergoing 'cultural coevolution,' shaping each other's behavior and outlook."—The Mudroom

"This is an aptly titled book that deals in a fascinating manner with the biological and cultural intersections that have occurred between humans and the crow-like birds throughout history. . . . It's a volume well worth anyone's time."—Paul A. Johnsgard, Great Plains Research

"A fascinating examination of two unsung birds and their relations with humans. . . . Stunningly illustrated."—Seattle Post-Intelligencer

"The book does a terrific job of telling exactly how and why people are so closely connected with crows. . . . In the Company of Crows and Ravens has set the bar very high for scientists who want to make their work relevant outside the academic world."—David L. Peterson, Northwest Science

"Marzluff is one of the top researchers today on the ecology, behavior, and conservation of crows. With Tony Angell as illustrator and coauthor, he has written a nice summary of our knowledge of these fascinating birds."—Louis Lefebvre, Quarterly Review of Biology

"Crows and ravens stir up much interest, precisely for the reasons John Marzluff and Tony Angell give in this handsomely illustrated work."—Bernd Heinrich, author of Mind of the Raven

"With engaging prose and compelling art, the authors tell us how our interactions with other species, especially crows and ravens, have influenced both us and them over the ages. . . . If you believe that we have great impacts on other species but that they have influenced us relatively little, then you should read this delightfully written and illustrated book."—Gordon H. Orians, University of Washington

"Throughout human history, crows have been reviled and revered in equal measure. Now the corvids of folklore and fable are living up to their reputation for cleverness, trickery and ingenuity. Marzluff and Angell's wonderful book is a user's guide to the biology and culture of these fascinating animals and a testament to man's affinity with nature."—Nathan Emery, University of Cambridge

"Members of the crow family (corvids), which include ravens, jays and magpies, as well crows, have the reputation of being mischievous, machaevellian creatures, who steal other birds' eggs and raid agricultural crops. But these corvids are also renowned for their wisdom as well as their deceit. This fascinating book describes not only the role corvids have played in our folklore but more generally how corvids have influenced human culture and the impact of humans on corvids. I hope this book will afford corvids the respect they deserve."—Nicola Clayton, University of Cambridge

"This is the most detailed account I know of concerning crows and their interaction with man. A very readable and thought-provoking book!"—Noble S. Proctor, Ph.D., author of Manual of Ornithology and A Field Guide to North Atlantic Wildlife