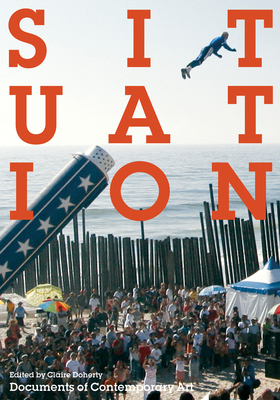 Key texts on the notion of “situation” in art and theory that consider site, place, and context, temporary interventions, remedial actions, place-making, and public space.

Situation—a unique set of conditions produced in both space and time and ranging across material, social, political, and economic relations—has become a key concept in twenty-first-century art. Rooted in artistic practices of the 1960s and 1970s, the idea of situation has evolved and transcended these in the current context of globalization. This anthology offers key writings on areas of art practice and theory related to situation, including notions of the site specific, the artist as ethnographer or fieldworker, the relation between action and public space, the meaning of place and locality, and the crucial role of the curator in recent situation specific art.

In North America and Europe, the site-specific is often viewed in terms of resistance to art's commoditization, while elsewhere situation-specific practices have defied institutions of authority. The contributors discuss these recent tendencies in the context of proliferating international biennial exhibitions, curatorial place-bound projects, and strategies by which artists increasingly unsettle the definition and legitimation of situation-based art.

Claire Doherty is Senior Research Fellow in Fine Art at the University of West England, Bristol, where she established Situations (www.situations.org.uk), a research and international commissioning program. She is Visiting Lecturer in Curating at the Royal College of Art, London, and Curatorial Director of the One Day Sculpture series, New Zealand. She is the editor of Contemporary Art: From Studio to Situation.

Douglas Crimp is Fanny Knapp Allen Professor of Art History at the University of Rochester. He is the author of On the Museum's Ruins and Melancholia and Moralism: Essays on AIDS and Queer Politics, both published by the MIT Press.

James Meyer is Associate Professor of Art History at Emory University. He is the author of Minimalism: Art and Polemics in the Sixties and the editor of The AIDS Crisis is Ridiculous and Other Writings 1986-2003 by Gregg Bordowitz (MIT Press, 2004).

Peter Weibel is Chairman and CEO of the ZKM | Center for Art and Media Karlsruhe. With Bruno Latour, he coedited ICONOCLASH and Making Things Public as well as other ZKM volumes, including, most recently, Sound Art and Global Activism (all published by the MIT Press).

Michel Foucault (1926–84) is widely considered to be one of the most influential academic voices of the twentieth century and has proven influential across disciplines.

Hal Foster is Townsend Martin '17 Professor of Art and Archaeology at Princeton University and the author of Prosthetic Gods (MIT Press) and other books.

Miwon Kwon is Assistant Professor of Art History at the University of California, Los Angeles.

Gilles Deleuze (1925-1995) was Professor of Philosophy at the University of Paris VIII, Vincennes/Saint Denis. He published 25 books, including five in collaboration with Félix Guattari.

Félix Guattari (1930–1992), post-'68 French psychoanalyst and philosopher, is the author of Anti-Oedipus (with Gilles Deleuze), and a number of books published by Semiotext(e), including The Anti-Oedipus Papers, Chaosophy, and Soft Subversions.

Gabriel Orozco is an internationally renowned contemporary artist. He has had solo exhibitions at venues including Musée d'art moderne de la Ville Paris, the Serpentine Gallery in London, and the Guggenheim in New York. Traveling retrospectives have been presented at Kunsthalle Zürich; Museum of Contemporary Art, Los Angeles; Museum of Modern Art, New York; Centre Pompidou, Paris; the Tate Modern, London; and elsewhere. He has participated in the Venice Biennale (1993, 2003, 2005), the Whitney Biennial (1997), and Documenta X (1997) and XI (2002).

Shep Steiner, an art historian and critic, teaches at Emily Carr University of Art and Design, Vancouver. His writing has appeared in C-Magazine, Parachute, Journal of Visual Culture, and other publications.

Writer, filmmaker, and cultural revolutionary, Guy Debord (1931–1994) was a founding member of the Lettrist International and Situationist International groups. His films and books, including Society of the Spectacle (1967), were major catalysts for philosophical and political changes in the twentieth century, and helped trigger the May 1968 rebellion in France.

Oskar Negt is Professor of Sociology at the Universität Hannover. Early in his career, he was a student of Theodor Adorno and assistant to Jürgen Habermas.

Alexander Kluge is an author and filmmaker, known for launching the New German Cinema in the early 1960s.

Conceptual artist Vito Acconci is known for his work in performance and video art.

Simon Sheikh, a curator and theorist, is Reader in Art and Programme Director of the MFA in Curating at Goldsmiths, University of London.

Dan Graham's artwork has been exhibited in museums and galleries around the world. His writings have appeared in Artforum, Arts, and numerous other magazines, books, and monographs.

Martha Rosler lives and works in Brooklyn, New York. She has taught and lectured on photography since the mid-1970s. Her work was the subject of a major retrospective, "Martha Rosler: Positions in the Life World," in 2000. She is the author of 14 books and numerous essays.

T. J. Demos, an award-winning writer, is Professor of Visual Culture at the University of California, Santa Cruz and Director of its Center for Creative Ecologies. He writes widely about contemporary art, global politics, and ecology, and is the author, most recently, of Against the Anthropocene: Visual Culture and Environment Today (Sternberg Press).

Daniel Birnbaum is a Swedish art critic, theoretician, and curator. He was the director of the Museum of Modern Art (Moderna Museet) in Stockholm from 2010 to 2018, and currently directs the VR company, Acute Art.

Andrea Fraser is an artist and Professor of Art at the University of California, Los Angeles. She is the author of Museum Highlights: The Writings of Andrea Fraser, published by the MIT Press.