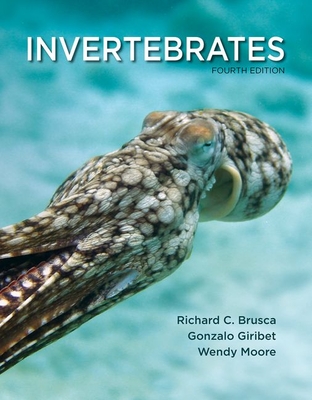 Invertebrates is a complete, trusted, and engaging textbook whose comprehensive coverage makes it an invaluable resource for both undergraduate and graduate courses and professional researchers. The 3rd edition has been widely praised for its detailed classifications, high-quality illustrations, and coverage of contemporary debates in the field. The 4th edition will continue to feature recent scholarship and current perspectives, while streamlining the text to improve accessibility for intro-level students. Gonzalo Giribet joins as coauthor, contributing his phylogenomic expertise as an Evolutionary Biologist and Phylogeneticist, and Director of Harvard's Museum of Comparative Zoology.

Richard C. Brusca, Ph.D., University of Arizona, is Executive Director Emeritus of the Arizona-Sonora Desert Museum and a Research Scientist in the Department of Ecology and Evolutionary Biology at the University of Arizona. Dr. Brusca is the author of over 200 research publications and 15 books, and the recipient of more than 100 research grants from the National Science Foundation, NOAA, and the National Geographic Society, and many others. He is a Fellow of the American Association for the Advancement of Science, the Linnean Society of London, and the California Academy of Sciences. His research interests include invertebrate zoology, the natural history of the Sonoran Desert and Gulf of California, and ecology of Arizona's Madrean Sky Islands. Gonzalo Giribet, Ph.D., University of Barcelona, is Alexander Agassiz Professor of Zoology, Curator of Invertebrates and Director of the Museum of Comparative Zoology, Harvard, and a Professor in the Department of Organismic and Evolutionary Biology. In addition, he holds an Doctor Honoris Causa from the University of Copenhagen, and he an Honorary Research Fellow at The Natural History Museum, London, a Fellow of the California Academy of Sciences, and a 2016 Fellow of the John Simon Guggenheim Memorial Foundation. He has published more than 400 scientific articles and book chapters, and has named more than 100 new species, genera, and families of invertebrates. His research is broadly interested in the origins and maintenance of animal diversity, which he explores through studying the evolution, systematics, and biogeography of invertebrate animals. Wendy Moore, Ph.D., University of Arizona, is Associate Professor in the Department of Entomology at the University of Arizona and Curator of the University of Arizona Insect Collection. Her long-term research interest is the evolution of diversity, particularly of invertebrates and especially of insects. She is a systematist who uses molecular-based phylogenetics to understand the evolution of morphology and how biotic, climatic, and tectonic events may have influenced the timing and patterns of diversification. She is also committed to natural history collections care and enhancement, and the use of bioinformatics to make collections-based data widely available to diverse user communities.