The Oxford History of the Prison: The Practice of Punishment in Western Society (Paperback) 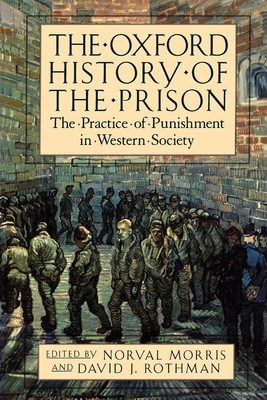 The word prison immediately evokes stark images: forbidding walls spiked with watchtowers; inmates confined to cramped cells for hours on end; the suspicious eyes of armed guards. They seem to be the inevitable and permanent marks of confinement, as though prisons were a timeless institution stretching from medieval stone dungeons to the current era of steel boxes. But centuries of development and debate lie behind the prison as we now know it--a rich history that reveals how our ideas of crime and practices of punishment have changed over time. In The Oxford History of the Prison, a team of distinguished scholars offers a vivid account of the rise and development of this critical institution. Penalties other than incarceration were once much more common, from such bizarre death sentences as the Roman practice of drowning convicts in sacks filled with animals to a frequent reliance on the scaffold and on to forms of public shaming (such as the classic stocks of colonial America). The first decades of the nineteenth century saw the rise of the full-blown prison system--and along with it, the idea of prison reform. Alexis de Tocqueville originally came to America to write a report on its widely acclaimed prison system.
The authors trace the persistent tension between the desire to punish and the hope for rehabilitation, recounting the institution's evolution from the rowdy and squalid English jails of the 1700s, in which prisoners and visitors ate and drank together; to the sober and stark nineteenth-century penitentiaries, whose inmates were forbidden to speak or even to see one another; and finally to the big houses of the current American prison system, in which prisoners are as overwhelmed by intense boredom as by the threat of violence. The text also provides a gripping and personal look at the social world of prisoners and their keepers over the centuries. In addition, thematic chapters explore in-depth a variety of special institutions and other important aspects of prison history, including the jail, the reform school, the women's prison, political imprisonment, and prison and literature. Fascinating, provocative, and authoritative, The Oxford History of the Prison offers a deep, informed perspective on the rise and development of one of the central features of modern society--capturing the debates that rage from generation to generation on the proper response to crime.

Norval Morris is the Julius Kreeger Professor of Law and Criminology at the University of Chicago. His numerous books include The Brothel Boy and Other Parables of the Law and Between Prison and Probation. David J. Rothman is Professor of History, Bernard Schoenberg Professor of Social Medicine, and Director of the Center for the Study of Society and Medicine at the Columbia College of Physicians and Surgeons. He is the author of The Discovery of the Asylum, Conscience and Convenience, and Strangers at the Bedside.