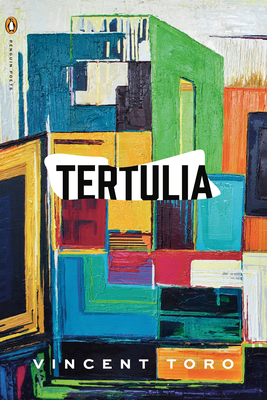 A fluid, expansive new collection from a poet whose work "dazzles with [an] energetic exploration of the Puerto Rican experience in the new millennium" (NBC News)

Puerto Rican poet Vincent Toro's new collection takes the Latin American idea of an artistic social gathering (the "tertulia") and revises it for the Latinx context in the United States. In verses dense with juxtaposition, the collection examines immigration, economics, colonialism and race via the sublime imagery of music, visual art, and history. Toro draws from his own social justice work in various U.S. cities to create a kaleidoscopic vision of the connections between the personal and the political, the local and the global, in a book that both celebrates and questions the complexities of the human condition.

Vincent Toro's debut poetry collection, STEREO.ISLAND.MOSAIC., was awarded the Poetry Society of America's Norma Farber First Book Award and the Sawtooth Poetry Prize. He is also a Poet's House Emerging Poets Fellow, a New York Foundation for the Arts Fellow in Poetry, and winner of The Caribbean Writer's Cecile De Jongh Poetry Prize and Repertorio Español's Nuestras Voces Playwriting Award. Vincent is a professor at Bronx Community College, is poet in the schools for Dreamyard and the Dodge Poetry Foundation, is writing liaison for The Cooper Union's Saturday Program, and is a contributing editor at Kweli Literary Journal.

“Toro’s poetry is exuberant and often comic, celebrating Latinx identity and culture in America even as it flags injustice and inequality at every turn.” —The New York Times Book Review

“Toro’s book successfully captures [the tertulia] spirit; it arrives with different shades and sections, unified by his risks (and successes) with poetic language . . . [E]xtreme focus and concision creates new visions . . . Awareness and vulnerability in this collection are complemented by empathy.” —The Millions

“[Toro’s] is a poetry of experimentation, musicality and political denouncement, a kaleidoscopic world full of powerful ideas that reveal one of the most exciting and inventive Latinx poets writing today.” —Morning Star (London)

“Delightfully erudite . . . Whether dissecting notions of privilege or interpreting American horror movies as thinly veiled anti-Latinx propaganda, Toro wields language like a new technology, and his lyrics burst with earthy energy . . . [he is] a poetic phenom.” —Booklist

“The rhythmic latest from Toro is steeped in spoken word beats as it addresses such contemporary issues as immigration, gun violence, and income inequality . . . this is an energetic effort by a supremely original voice.” —Publishers Weekly

“As proposed by James Baldwin in 'The Creative Process,' Vincent Toro has taken up the artist’s mantle to expose & mirror society’s true conditions (& 'faces') to itself for the sake of liberation. You must bring your whole self to the reading of his work that explores the gamut of human error, evil, striving & triumph, while probing how complex, revelatory & potent language can be. These poems demand revolution in our ways of thinking, framing, creating & being. These poems don’t flinch or let you catch your breath, yet are clearly driven by a tenacious love & radical hope. Formally inventive, these urgent poems valiantly 'comfort the afflicted and afflict the comfortable.'” —Kamilah Aisha Moon, author of Starshine & Clay

“Tertulia is explosive; it detonates on all levels: tradition, comic, formalistic, political, and diaspora. There are not enough poetics in the world to define or categorize Toro’s work. You might flinch when you read these poems, so arm yourself.” —Willie Perdomo, author of The Crazy Bunch

“Tertulia struts around the edge of American civilization and the slant truth of history in poems saturated by an uninhibited discourse that engages the sublime and the low. His ekphrasis is cinematic, his lines symphonic. Toro makes testimonios stricken from public record known with his signature electromagnetic hand jive. This book excited and delights and provokes. Tertulia like it’s 1999!” —Carmen Gimenez Smith, author of Milk and Filth and Be Recorder

“Toro’s poetry seeks to explore and embody the realities of hybrid identities resulting from these intersections . . . Stuck in a limbo between cultures, Toro pulls from both to create his own; Spanish and English brush against one another with no final assimilation.” —Scout Poetry

“Sugar-slicked, tightly controlled lyric shifts and clever formal constraints allow Toro to confront the difficulty of truth-telling without self-exoticization. Yet he remains able to find those truths: erasures of his own poems become fragmented stutters, then silence. These tonally dense, structurally varied poems often adapt Puerto Rican lyric and musical forms; this nuanced engagement with generational distortions of Taino heritage is also evoked in the blending of mythology with experience . . . Toro's evocative portrayal of intergenerational migrant realities reveals what it's like to be 'neither boundary / nor center / neither master nor serf.'” —Publishers Weekly