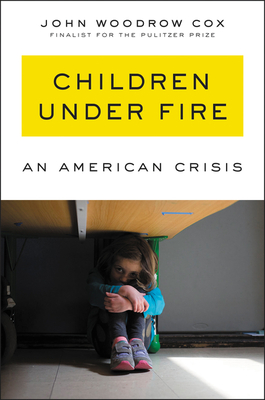 A New York Times, Newsweek, Buzzfeed, and Publishers Weekly Most Anticipated Book of the Year

Based on the acclaimed series—a finalist for the Pulitzer Prize—an intimate account of the devastating effects of gun violence on our nation’s children, and a call to action for a new way forward

In 2017, seven-year-old Ava in South Carolina wrote a letter to Tyshaun, an eight-year-old boy from Washington, DC. She asked him to be her pen pal; Ava thought they could help each other. The kids had a tragic connection—both were traumatized by gun violence. Ava’s best friend had been killed in a campus shooting at her elementary school, and Tyshaun’s father had been shot to death outside of the boy’s elementary school. Ava’s and Tyshaun’s stories are extraordinary, but not unique. In the past decade, 15,000 children have been killed from gunfire, though that number does not account for the kids who weren’t shot and aren’t considered victims but have nevertheless been irreparably harmed by gun violence.

In Children Under Fire, John Woodrow Cox investigates the effectiveness of gun safety reforms as well as efforts to manage children’s trauma in the wake of neighborhood shootings and campus massacres, from Columbine to Marjory Stoneman Douglas. Through deep reporting, Cox addresses how we can effect change now, and help children like Ava and Tyshaun. He explores their stories and more, including a couple in South Carolina whose eleven-year-old son shot himself, a Republican politician fighting for gun safety laws, and the charlatans infiltrating the school safety business.

In a moment when the country is desperate to better understand and address gun violence, Children Under Fire offers a way to do just that, weaving wrenching personal stories into a critical call for the United States to embrace practical reforms that would save thousands of young lives.

JOHN WOODROW COX is a staff writer at The Washington Post. He was a finalist for the 2018 Pulitzer Prize in feature writing and has won Scripps Howard’s Ernie Pyle Award for Human Interest Storytelling, the Dart Award for Excellence in Coverage of Trauma, and Columbia Journalism School’s Meyer “Mike” Berger Award for human-interest reporting, among other honors. He attended the University of Florida, where he has taught narrative writing and currently serves on the Department of Journalism’s Advisory Council. He lives outside Washington, DC, with his wife, Jenn.

"A searing new book . . . [Children Under Fire] should force change."
— Editorial Board, The Washington Post

“Cox shines a light on America's gun violence crisis through deeply personal and profoundly affecting stories of the children who live with its everlasting repercussions.”
— Newsweek

“Demonstrates that the most effective riposte to those who fetishize bearing arms is to bear witness.”
— New York Times Book Review

“An important book and should be read by as many people as possible.”
— Washington Post

“[A] powerful report on the emotional scars left by gun violence . . . Cox analyzes the gun crisis astutely, but his surpassing achievement in this eloquent book is to let children speak for themselves about their grief. Put this one on a shelf with Alex Kotlowitz’s There Are No Children Here—and have a box of tissues handy . . .  indispensable.”
— Kirkus Reviews (starred review)

“Absorbing . . . at once painful to read but vitally necessary if Americans are to understand the ‘widely ignored’ epidemic that affects millions in ways we still do not fully understand. . . . A strikingly empathetic, well-crafted report, [and] an urgent call to sensible action on behalf of our nation’s children.”
— New York Journal of Books

“Cox adapts his groundbreaking Pulitzer Prize–nominated series in this harrowing and illuminating account of gun violence in America, told through the children witnessing (and traumatized by) it, interwoven with an analysis of the government’s profound failure to protect them.”
— Buzzfeed, “Most Anticipated Books Of 2021”

“A difficult but important book, refusing to allow its readers to look away from the true human cost of America’s continued failure to protect its children from gun violence.”
— Booklist

“A carefully reasoned, compelling, and persuasive study of a crisis that requires immediate attention.”
— Library Journal

"A hard-hitting report. . . . [Children Under Fire] illuminates both the emotional trauma of gun violence and the healing power of friendship for its youngest victims. . . . Balancing sound research with moving profiles of victims and activists, Cox makes an impeccable case for how to solve the problem and why it's essential to do so now."
— Publishers Weekly (starred review)

“Children Under Fire is a major accomplishment. Anyone who cares about the problem of guns in America—and we all should—will find in John Woodrow Cox’s work fresh insights and suggestions for common-sense solutions. This deeply reported, impressive book is sure to be one of the most important of the year.”
— Dan Rather, journalist and author of What Unites Us

“In Children Under Fire, one of our most gifted storytellers and meticulous reporters probes the unspeakable toll that this nation's unabated gun violence exacts of our most vulnerable: our kids. John Woodrow Cox writes with a searing clarity, laying bare the uniquely American tragedy that has traumatized generations of our children and, by our continued inaction, threatens to traumatize generations more.”
— Wesley Lowery, Pulitzer Prize-winning journalist and author of They Can't Kill Us All: Ferguson, Baltimore and a New Era in America's Racial Justice Movement

“This heartbreakingly beautiful work brings us into the minds of children like Ava & Tyshaun, helping us to better understand that the scars of gun violence are not just physical. Their unforgettable stories are sure to inspire calls for action, as the book makes an eloquent case that the time has come to pass meaningful reforms to address America’s gun violence crisis.”
— Former U.S. Congresswoman Gabrielle Giffords

“This is a book like no other because it is told by the children whose lives have been shattered by gun violence in their families, their schools and in their communities. They are the experts America has ignored for too long. Not anymore. John Woodrow Cox has a profound respect for children and a willingness to listen to them. In return, they have trusted him with the hardest stories of their lives."
— Connie Schultz, Pulitzer Prize-winning author of The Daughters of Erietown

“A great and necessary book that shatters our numbness toward gun violence in America and treats the epidemic with the urgency it deserves. With remarkable empathy and incisive reporting, John Woodrow Cox introduces us to young victims and survivors whose stories become unforgettable. His reporting demands that we do better — and also reveals how we can.”
— Eli Saslow, author of Rising Out of Hatred: The Awakening of a Former White Nationalist

“A riveting examination of the impact of gun violence on kids. John Woodrow Cox brings his full brilliance, compassion and storytelling strength to this complex subject. This book is an urgent read if we are to move past our paralysis as a nation and save more young lives.”
— Kevin Merida, author of Supreme Discomfort: The Divided Soul of Clarence Thomas

“John Woodrow Cox has dedicated years of his life and career to covering some of the most difficult and important stories of our time about how trauma—particularly in the aftermath of gun violence— impacts everyday Americans. His humanity and attention to detail breathes life into statistics and enables him to embody his subjects, drawing readers into the narratives he weaves and rendering them altered by the end. John’s stories will never leave your conscience, nor should they.”
— Shannon Watts, founder of Moms Demand Action and Everytown for Gun Safety, and author of Fight Like a Mother

“An astounding, heartbreaking, hopeful book. Cox has a reporter’s ear, a director’s eye and a poet’s rhythm as he weaves key facts through the powerful stories of children and families impacted by gun violence, using his gifts to bring the scope of these problems to light. I can’t recommend this book enough; it is one of the few I’ve read that has the potential to lead to meaningful change in our gun-sick society.”
— Bruce Perry, author of The Boy Who Was Raised As a Dog