The Composer Is Dead (Library Binding) 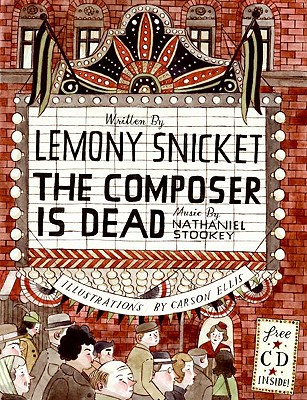 “Who better to introduce children to the depths of an orchestra but Lemony Snicket? The Composer is Dead is an entertaining murder mystery that gives each instrument a voice and more character than words can describe.”
— April Gosling, Horizon Books, Petoskey, MI

There's dreadful news from the symphony hall—the composer is dead!

If you have ever heard an orchestra play, then you know that musicians are most certainly guilty of something. Where exactly were the violins on the night in question? Did anyone see the harp? Is the trumpet protesting a bit too boisterously?

In this perplexing murder mystery, everyone seems to have a motive, everyone has an alibi, and nearly everyone is a musical instrument. But the composer is still dead.

Perhaps you can solve the crime yourself. Join the Inspector as he interrogates all the unusual suspects. Then listen to the accompanying audio recording featuring Lemony Snicket and the music of Nathaniel Stookey performed by the San Francisco Symphony. Hear for yourself exactly what took place on that fateful, well-orchestrated evening.

Lemony Snicket had an unusual education which may or may not explain his ability to evade capture. He is the author of the 13 volumes in A Series of Unfortunate Events, several picture books including The Dark, and the books collectively titled All The Wrong Questions.

Carson Ellis is the illustrator of a number of books for children, including the Wildwood Chronicles, and is the author and illustrator of the picture books Du Iz Tak?, a Caldecott Honor winner, and Home. Carson lives just outside Portland, Oregon, with her family.