Spinning the Globe: The Rise, Fall, and Return to Greatness of the Harlem Globetrotters (Paperback) 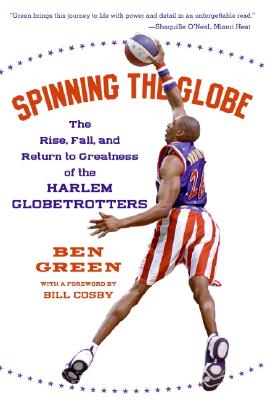 Before Wilt Chamberlain, Bill Russell, Julius Erving, or Michael Jordan––before Magic Johnson and Showtime––the Harlem Globetrotters revolutionized basketball and spread the game around the world. In Spinning the Globe, author Ben Green tells the story of this extraordinary franchise and iconic American institution. We follow the Globetrotters' rise from backwoods obscurity during the harsh years of the Great Depression to become the best basketball team in the country and, by the early 1950s, the most popular sports franchise in the world. Green brings to life their struggles with racism and segregation, and their influence upon a nation's views about race and sport. We witness the Globetrotters' fall from grace to the brink of bankruptcy in the early 1990s, and their ultimate rebirth under Mannie Jackson today, as they once again amaze kids and families around the world. Now in paperback, this is the true and complete story of their amazing eighty years as a team, told with lyrical prose and masterful storytelling by Ben Green.

Ben Green is the highly acclaimed author of Before His Time (the subject of a PBS documentary), The Soldier of Fortune Murders (which sold more than 100,000 copies and was the basis for a CBS miniseries), and Finest Kind. A former Bread Loaf Fellow, Green lives in Tallahassee, Florida, with his wife, Tracie, and two daughters, Emily and Eliza. He is a graduate of Brandeis University and is on the faculty of Florida State University.

“...an ambitious, engaging book on the history of the Globetrotters.”
— Black Issues Book Review