Bridges to Cuba/Puentes a Cuba (Paperback) (Used) (Word Up) 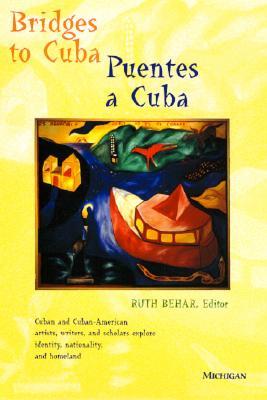 Through personal essays and poetry, short fiction and painting, book reviews, interviews, performance pieces, and hybrid creations of text and image, Bridges to Cuba/Puentes a Cuba opens a window onto the meaning of nationality, transnationalism, and homeland in our time. For more than thirty-five years U.S.-Cuban relations have been couched in terms of the Cold War, often pitting Cubans in the diaspora against Cubans who remain in their homeland. Bridges to Cuba/Puentes a Cuba celebrates the informal networks that Cubans in both countries have maintained through artistic, academic, family, and other ties.
The book brings together for the first time in English Cuban voices of the second generation, both on the island and in the diaspora. The multivocal and multigenre collection includes both scholarly and creative writing and an impressive range of visual art. The participants are earnest, angry, witty, and hopeful. They are sometimes visionaries, but they are not deluded about Cuban or North American realities. Their voices offer testimony to the continuing efforts of Cubans and Cuban-Americans to look beyond the animosities and failings of their respective societies and find possibilities for personal and international reconciliation, dialogue, and renewal.
"Ruth Behar, as editor of Bridges to Cuba/Puentes a Cuba, leaps across conventional intellectual boundaries in an effort to show the complexity of nationhood, exile, and revolution in the Cuban experience of the last thirty years. An important book about the possibility and impossibility of building cultural and political bridges."--Arcadio Diaz-Quinones, Princeton University
"Behar narrows the straits of Florida with a richly textured dialogue of voices in and out of Cuba. Bridges to Cuba is sure to make history."--Liz Balmaseda, Miami Herald
"A vital and interesting anthology about contemporary Cuba."--Oscar Hijuelos, author of The Mambo Kings Play Songs of Love
"Bridges to Cuba is the first U.S. anthology that looks at Cuban creativity from an integrated perspective, refusing to kneel before the painful and often arbitrary divisions that have split the voices of this passionate culture into forever separate bands. The results are magnificent. Read this book and get a long overdue understanding of contemporary Cuban literature and art."--Margaret Randall, author of Women in Cuba: Twenty Years Later
"In order for memory to be recovered, there must be a community that remembers and tells the story. . . . Bridges to Cuba displays a wealth of insights that leave the reader with a sense of having experienced first hand the intricate web of thought and feeling that is Cuban life."--Latino Review of Books
"Ruth Behar's anthology represents one of the most important and moving bridges yet published on contemporary Cuba and its condition as the island that is still absent from the Western world. Bridges to Cuba is an extraordinary example of the faith and ability of Latin American intellectuals to cross true bridges, bridges of solidarity."--Marjorie Agosin, Wellesley College
Ruth Behar is author of Translated Woman: Crossing the Border with Esperanza's Story and coeditor, with Deborah Gordon, of Women Writing Culture. She has been the recipient of awards from the MacArthur and Guggenheim foundations.