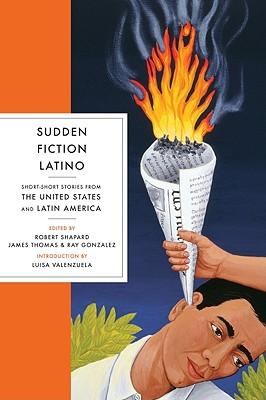 Author:
Robert Shapard (Editor), James Thomas (Editor), Ray Gonzales (Editor), Luisa Valenzuela (Introduction by)
About The Author:
Robert Shapard directed the University of Hawaii MFA program and now lives in Austin, Texas. James Thomas has received a Stegner Fellowship, a Michener Fellowship, and two NEA grants. He lives in Xenia, Ohio. Ray Gonzalez is one of America’s foremost authors, scholars, and editors in Latino literature. Luisa Valenzuela was born in Buenos Aires, Argentina in 1938. In 1958, she moved to France and wrote her first novel while living in Paris. In 1979, she moved to the United States and lived in New York for ten years, working as a writer in residence at the Center for Inter-American Relations at NYU and Columbia. She was awarded a Guggenheim Fellowship in 1983.
$5.00
Description:

For readers who love great short-short stories, this bountiful anthology is the best of Latin American and U.S. Latino writers.

Following on the success of the Flash Fiction and Sudden Fiction series, Robert Shapard and James Thomas join with Ray Gonzalez in selecting works that each present a complete story in less than 1,500 words. Luisa Valenzuela, one of Latin America’s most lauded writers, provides the introduction. Readers will delight in finding stars such as Junot Díaz, Sandra Cisneros, and Roberto Bolano alongside recognized masters like Gabriel García Márquez, Isabel Allende, and Jorge Luis Borges. They will discover work from Andrea Saenz, Daniel Alarcón, and Alicita Rodriguez, as well as other writers on the rise.

In Julio Ortega’s “Migrations,” a Peruvian writer explores how immigrant speech and ethnic origins are a force of meaning that evolves beyond language. In “Hair,” by Hilma Contreras, a Caribbean pharmacist is driven mad by a young woman’s luxuriant tresses. These stories stretch from gritty reality to the fantastical in a mix that is moving, challenging, humorous, artful, sometimes political, and altogether spectacular.