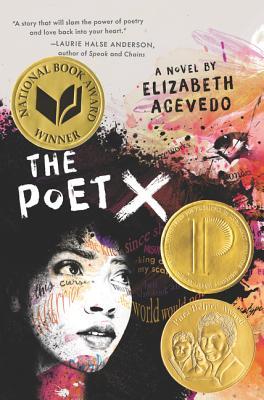 Author:
Elizabeth Acevedo
About The Author:
Elizabeth Acevedo is the author of The Poet X—which won the National Book Award for Young People’s Literature, the Michael L. Printz Award, the Pura Belpré Award, the Boston Globe–Horn Book Award, and the Walter Award—as well as With the Fire on High and Clap When You Land. She is a National Poetry Slam champion and holds an MFA in creative writing from the University of Maryland. Acevedo lives with her partner in Washington, DC. You can find out more about her at www.acevedowrites.com.
$17.99
Description:

Winner of the National Book Award for Young People’s Literature, the Michael L. Printz Award, and the Pura Belpré Award!

Fans of Jacqueline Woodson, Meg Medina, and Jason Reynolds will fall hard for this astonishing New York Times-bestselling novel-in-verse by an award-winning slam poet, about an Afro-Latina heroine who tells her story with blazing words and powerful truth.

Xiomara Batista feels unheard and unable to hide in her Harlem neighborhood. Ever since her body grew into curves, she has learned to let her fists and her fierceness do the talking.

But Xiomara has plenty she wants to say, and she pours all her frustration and passion onto the pages of a leather notebook, reciting the words to herself like prayers—especially after she catches feelings for a boy in her bio class named Aman, who her family can never know about.

With Mami’s determination to force her daughter to obey the laws of the church, Xiomara understands that her thoughts are best kept to herself. So when she is invited to join her school’s slam poetry club, she doesn’t know how she could ever attend without her mami finding out. But she still can’t stop thinking about performing her poems.

Because in the face of a world that may not want to hear her, Xiomara refuses to be silent.

“Crackles with energy and snaps with authenticity and voice.” —Justina Ireland, author of Dread Nation

“The force and intensity behind her words practically pushes them off the page, resulting in a verse novel that is felt as much as it is heard. This is a book from the heart, and for the heart.”
— New York Times Book Review

“A story that will slam the power of poetry and love back into your heart.”
— Laurie Halse Anderson, author of Speak and Chains

“Crackles with energy and snaps with authenticity and voice. Every poem in this stunningly addictive and deliciously rhythmic verse novel begs to be read aloud.  Xiomara is a protagonist who readers will cheer for at every turn. As X might say, Acevedo’s got bars. Don’t pass this one by.”
— Justina Ireland, author of Dread Nation

“In The Poet X, Acevedo skillfully sculpts powerful, self-contained poems into a masterpiece of a story, and has amplified the voices of girls en el barrio who are equal parts goddess, saint, warrior, and hero.”
— Ibi Zoboi, author of American Street

“Though vivid with detail about family, love, and culture, The Poet X is more of an exploration of when the poet becomes the poem... Acevedo delivers an incredibly potent debut.”
— Jason Reynolds, author of National Book Award Finalist Ghost

“A glorious achievement. This is a story about what it means to be a writer and how to survive when it feels like the whole world’s turned against you.”
— Daniel José Older, author of the Shadowshaper Cypher series

“A powerful, heartwarming tale of a girl not afraid to reach out and figure out her place in the world.”
— Booklist

★ “Themes as diverse as growing up first-generation American, Latinx culture, sizeism, music, burgeoning sexuality, and the power of the written and spoken word are all explored with nuance. Poignant and real, beautiful and intense.”
— Kirkus Reviews (starred review)

★ “Debut novelist Acevedo’s free verse gives Xiomara’s coming-of-age story an undeniable pull, its emotionally charged bluntness reflecting her determination and strength. At its heart, this is a complex and sometimes painful exploration of love in its many forms, with Xiomara’s growing love for herself reigning supreme.”
— Publishers Weekly (starred review)

★ “In nearly every poem, there is at least one universal truth about adolescence, family, gender, race, religion, or sexuality that will have readers either nodding in grateful acknowledgment or blinking away tears.”
— Horn Book (starred review)

“Acevedo plays with language, form, and space in a way that commands attention, pulling readers from one emotional extreme to the next without pause or remorse... Readers will applaud Xiomara as she journeys from a place of cautious defensiveness to being confident in the power of her voice.”
— Bulletin of the Center for Children’s Books

★ “Acevedo’s poetry is skillfully and gorgeously crafted, each verse can be savored on its own, but together they create a portrait of a young poet sure to resonate with readers long after the book’s end.”
— School Library Journal (starred review)