Listen to the Echoes: The Ray Bradbury Interviews (Paperback) (Word Up) 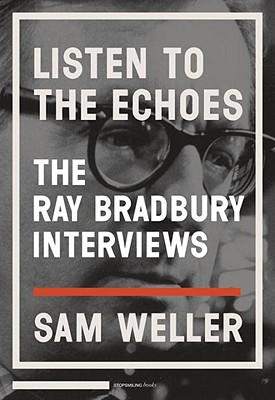 Author:
Ray Bradbury, Sam Weller (Editor), Zen Sekizawa (Photographer)
About The Author:
Sam Weller is the author of "The Bradbury Chronicles: The Life of Ray Bradbury," the first ever biography of Ray Bradbury, which received the prestigious Society of Midland Authors award for best biography in 2005, and was short-listed for the Bram Stoker award in the best nonfiction category. The book was a "Los Angeles Times" bestseller and was named a best book of the year by the "Chicago Tribune, the Denver Rocky Mountain News," and "the Atlanta Journal-Constitution."
$20.00
Description:

A definitive collection of interviews with one of America's most famous writers, covering his life, faith, friends, politics, and visions of the future.
Ray Bradbury, the poetic and visionary author of such classics as "Fahrenheit 451, The Martian Chronicles "and "The Illustrated Man," is one of the most influential writers of the 20th century. From Mikhail Gorbachev to Alfred Hitchcock to David Bowie, Bradbury's sway on contemporary culture is towering. Acclaimed biographer and Bradbury scholar Sam Weller has spent more than a decade interviewing the author; the fascinating conversations that emerge cast a high-definition portrait of a creative genius and a futurist who longs for yesterday. "Listen to the Echoes: The Ray Bradbury" Interviews is the definitive collection of interviews with an American icon.

"A book that's feisty and that charges full-speed ahead, a book that practically levitates out of your hands as you turn the pages — there is that much energy in it, that much love for life and for books and for the people who make and read them."
—Julia Keller, The Chicago Tribune

"Sam Weller knows more about my life than I do."
—Ray Bradbury

“Weller…organized the interviews into sections such as ‘Childhood,’ ‘Hollywood,’ ‘Faith,’ ‘Politics,’ and ‘Sexuality.’ He offers an insightful introduction to each. (Another diehard fan, Black Francis of the Pixies, penned the forward). Overall, this is a book that brims over with inspiration and imagination found in the words of a 90-year-old man who’s never lost his passion.”
—Chicago Sun-Times

“The book is impressively packed with illuminating details about the rise of such an iconic writer’s career. Casual admirer or super-fan, in Listen to the Echoes Ray Bradbury’s remarkable spirit will break your heart at least once.”
—Nylon

“Weller is the quintessential interviewer who asks probing questions, then gets out of the way so that readers will have the feeling that Bradbury is talking to them. Bradbury comes across as honest, opinionated, passionate, and childlike. This book will please ardent Bradbury fans and those just looking into his work. Recommended.”
—Library Journal

"If The Bradbury Chronicles is exhaustive, it is never exhausting, and each anecdote adds light and color to the portrait [Weller] has painted of a writer of real accomplishment."
—The Los Angeles Times