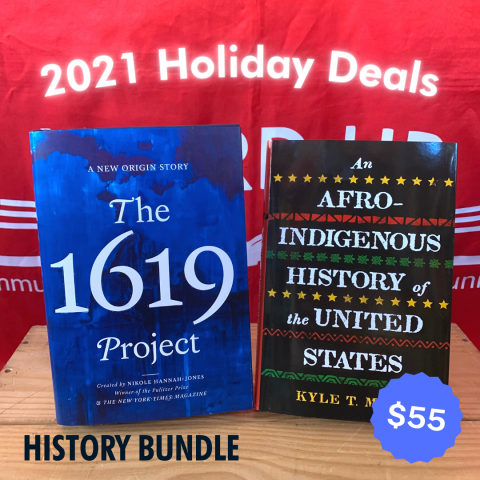 An Afro-Indigenous History of the United States (Hardcover)

Beginning with pre-Revolutionary America and moving into the movement for Black lives and contemporary Indigenous activism, Afro-Indigenous historian Kyle T. Mays argues that the foundations of the US are rooted in antiblackness and settler colonialism, and that these parallel oppressions continue into the present. He explores how Black and Indigenous peoples have always resisted and struggled for freedom, sometimes together, and sometimes apart. Whether to end African enslavement and Indigenous removal or eradicate capitalism and colonialism, Mays show how the fervor of Black and Indigenous peoples calls for justice have consistently sought to uproot white supremacy.

Mays uses a wide-array of historical activists and pop culture icons, “sacred” texts, and foundational texts like the Declaration of Independence and Democracy in America. He covers the civil rights movement and freedom struggles of the 1960s and 1970s, and explores current debates around the use of Native American imagery and the cultural appropriation of Black culture. Mays compels us to rethink both our history as well as contemporary debates and to imagine the powerful possibilities of Afro-Indigenous solidarity.

#1 NEW YORK TIMES BESTSELLER • A dramatic expansion of a groundbreaking work of journalism, The 1619 Project: A New Origin Story offers a profoundly revealing vision of the American past and present.

In late August 1619, a ship arrived in the British colony of Virginia bearing a cargo of twenty to thirty enslaved people from Africa. Their arrival led to the barbaric and unprecedented system of American chattel slavery that would last for the next 250 years. This is sometimes referred to as the country’s original sin, but it is more than that: It is the source of so much that still defines the United States.

The New York Times Magazine’s award-winning “1619 Project” issue reframed our understanding of American history by placing slavery and its continuing legacy at the center of our national narrative. This new book substantially expands on that work, weaving together eighteen essays that explore the legacy of slavery in present-day America with thirty-six poems and works of fiction that illuminate key moments of oppression, struggle, and resistance. The essays show how the inheritance of 1619 reaches into every part of contemporary American society, from politics, music, diet, traffic, and citizenship to capitalism, religion, and our democracy itself.

This is a book that speaks directly to our current moment, contextualizing the systems of race and caste within which we operate today. It reveals long-glossed-over truths around our nation’s founding and construction—and the way that the legacy of slavery did not end with emancipation, but continues to shape contemporary American life.